I was asked to create a proof-of-concept for storing and analyzing clickstream events. The events would be stored in a data lake using AWS S3 and AWS Glue, and for testing the data lake I needed a clickstream generator that simulates customers browsing product groups and products in a hypothetical web store. The picture below shows the AWS infrastructure of the POC.

Proof-of-concept of a S3 based Data lake for Clickstream events.

So, this would be a good reason to refresh my Clojure programming skills (see my earlier Clojure related blog post: Clojure Impressions Round Two.

The implementation of the Clickstream Web service server is in my github account: https://github.com/karimarttila/clojure/tree/master/clickstream-generator . The link shows the README.md which explains most of the technicalities, so I’m not going to explain the same stuff here. Instead, I’ll write here some experiences implementing a Web service server using Clojure, how to develop a Clojure application and how to integrate the Clojure application with AWS.

I have been using Tensorflow lately in my Machine learning exercises, and therefore used quite a bit the Python REPL (both with PyCharm and command line). Python REPL is good (if you have used languages like Java which provide no REPL at all — except Java 9 introduced some REPL which I haven’t tried yet). But every time I use the Python REPL I just miss the power and easiness of the Clojure REPL, especially when using it with Cursive. And using Cursive is even more enjoyable if you assign good hot keys for it. Some of my own favorite Cursive hot keys are: 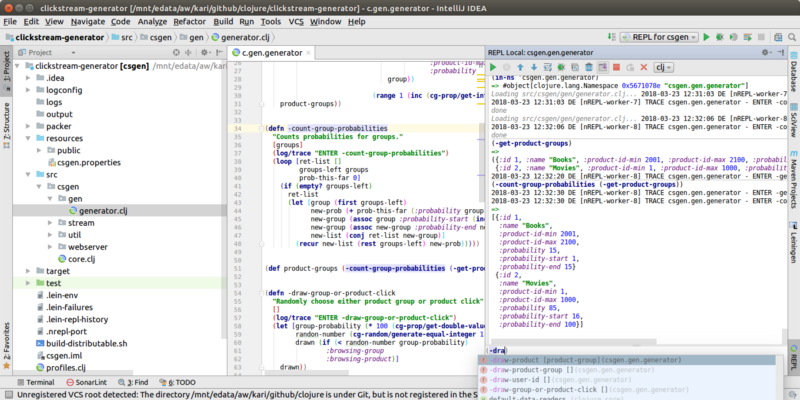 So, in the editor window I have entered the hot key

The example above was created for an internal throw-away POC so I didn’t implement that many test cases for it. There is one test, however. The test verifies that the product group probabilities work as expected within a given delta. Test cases are pretty easy to create using Clojure. Clojure code is tight and pretty declarative so it is usually very easy to see the purpose of the test code just by looking at it. For tests I have two favorite hot keys:

Starting/stopping the clickstream server is exposed as a web service. I have used two widely used Clojure libraries for the web service functionality:

The server provides simple routing of these urls:

I use the Clojure async/go functionality to generate the clicks while the web server itself continues to listen commands in the main thread:

There is an excellent AWS API library for Clojure: Amazonica. There is an example in the streamer.clj file how to use it:

If you are interested to use Clojure with AWS you should explore Amazonica — there are API functions for all major AWS services like Kinesis, EC2, S3, Lambda, SNS, SQS… And if you don’t find a Clojure API for some specific AWS service or functionality you can always use the Java AWS SDK since Clojure is a JVM hosted language and seamlessly integrates with Java.

There are two basic ways to create a deployment unit for this kind of web server in an AWS environment: AWS AMI and Docker container. AWS Lambda is not an option since the web server is a stateful entity (knows whether it is in a stopped or running state). For the POC I wanted minimal hassle so I used Packer and Ansible to create a simple AMI which could be then deployed as part of the AWS POC infra. I have already covered how to create AWS AMIs and Docker containers in other blog posts, e.g. How to Create EC2 Images in AWS?, How to Create Docker Containers in AWS? and AWS Batch and Docker Containers.

Using Clojure to implement all kind of software components is really a joy. Using Clojure REPL makes the software development an exciting exploratory journey — no more long compile-build-deploy-test cycles but you can test small Clojure functions in isolation using the REPL. You can then package your Clojure applications as an AWS AMI or a Docker image to be used in an AWS environment.