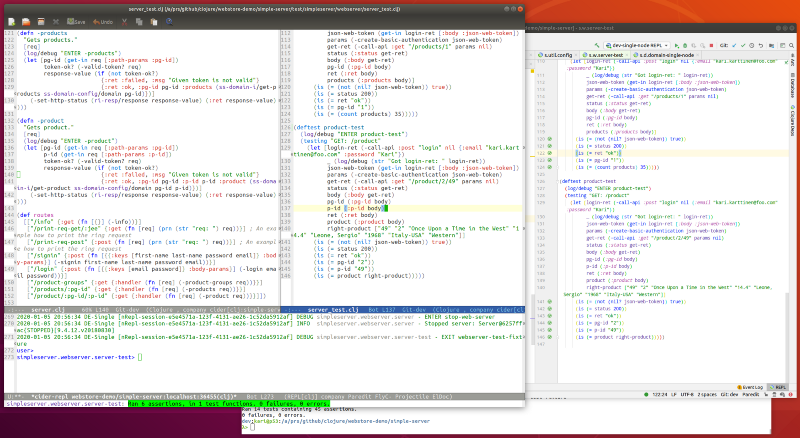 The Clojure IDEs used in this exercise: Emacs + Cider and Intellij IDEA + Cursive.

In this new “Clojure Impressions Round Three” blog post I document some new Clojure programming practices I learned doing this new Clojure exercise.

I watched Chicago Clojure — 2017–06–21 — Stuart Halloway on Repl Driven Development presentation and I realized that previously I had done REPL driven development completely wrong: I had written all REPL experimentation in the REPL editor. Instead you should use some scratch file and just send the S-expressions to the REPL for compilation and evaluation. This way you can have all your experimentation saved in a scratch file. In this exercise I actually created three kinds of Clojure files:

I.e. jump into the right namespace, start the server, curl one api, stop the server and go back to user namespace. You can run the S-expression in the scratch file with one hotkey, of course (more about configuring Clojure hot keys in my next blog post, so stay tuned!).

So, if you are learning Clojure I strongly recommend to learn efficient REPL practices, e.g. watch the above mentioned Stuart Halloway’s presentation. Another great resource for learning efficient Clojure REPL practices is Eric Normand’s excellent REPL Driven Development course. REPL is the very heart and soul of Clojure development — learn to use it.

You Can Do It Without Application State Management Libraries

This is a trick I learned from one of Stuart Halloway’s excellent videos. Add at the end of your Clojure (production) file a “rich comment” which demonstrates how to use the entities defined in that namespace. Example from: domain_single_node.clj:

I.e. a comment S-expression defines valid Clojure code that gets parsed but not evaluated. This way the code doesn’t have any effect in production but during development it provides a nice way to give examples how to use entities in your Clojure code and also quickly evaluate the S-expressions inside the comment block (efficiently and quickly using your Clojure editor hot keys, of course).

You don’t need a debugger with Clojure. :-) There is a debugger in IntelliJ IDEA + Cursive (and in Emacs + Cider), but I only once tried that it works. If you want to learn good debugging practices in Clojure you need to learn to use the REPL efficiently. Good resources are the above mentioned REPL Driven Development course and Chicago Clojure — 2017–06–21 — Stuart Halloway on Repl Driven Development video. E.g. in that video Stuart shows how to implement a simple breakpoint using Cursive — i.e. create your own debugger!

To run the unit tests in command line use: run-tests.sh, example:

I used IntelliJ IDEA + Cursive plugin when implementing this Clojure exercise but just out of curiosity I wanted to try how it feels like to use Emacs +Cider when programming Clojure. The experience was quite pleasant. I managed to configure Emacs with the same theme I use with IntelliJ (leuven — mostly the same colors for the same syntactic/semantic entities) and the same hotkeys to compile code regarding one S-expression or the whole namespace, run all tests in the namespace or just the test under cursor etc. It took some time and some googling regarding Emacs elisp but finally I was pretty satisfied: now I can quite effortlessly use either IntelliJ IDEA + Cursive or Emacs + Cider when developing Clojure code — and the look-and-feel is pretty much the same. Why? Well, e.g. you can use Emacs + Cider in headless environments where you don’t have GUI.

Emacs with various helpful packages like company, projectile, clojure-mode, cider, eldoc-mode turn Emacs to quite a powerful integrated development environment for Clojure. I recommend you to give Emacs a try. But I must say that I think I will stick with IntelliJ IDEA + Cursive when programming Clojure — IntelliJ is just a superb IDE.

By the way. Stay tuned in my blog, since my next blog post will provide the experiences how to configure IntelliJ IDEA + Cursive and Emacs + Cider with various hotkeys to make Clojure coding a breeze!

For a Clojure Learner

I hope this exercise is helpful also for someone learning Clojure. I have tried to provide some efficient Clojure programming practices and links to various resources you can find more information. Try to configure e.g. Emacs the same way I did, git clone this repository, load various namespaces and try to send the S-expressions in the scratch file for evaluation to REPL.