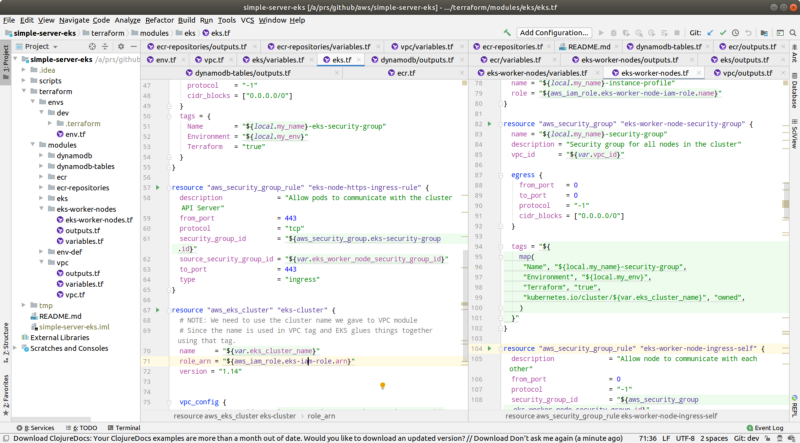 A screenshot of one of my personal cloud projects.

I have been working in various cloud infrastructure projects using AWS, Azure, and GCP implementing infrastructure with native tools and with Terraform and Pulumi. I have seen that there are a few success factors how to make infrastructure in software development projects. I have also seen some tar pits to avoid. In this short blog post, I write about my experiences regarding how to do infrastructure as code — and how not to do it.

Two Golden Rules Above All

If you don’t remember anything else after reading this blog post, remember these two golden rules:

It is so common how often this rule is violated and practically always violating this rule ends up with a fragile infrastructure.

Once a customer asked my team to audit a cloud project that had some issues to deliver results at a faster pace. The story was, the client told us, that in the beginning the project seemed to be progressing nicely but had halted later on. My team took a look at the project — everything was implemented using the cloud provider’s portal. No wonder the progress was fast in the beginning — it is fast to create the infrastructure using the portal. But the ugly side of the coin is that you can’t automatically create identical copies of that infrastructure — since every single detail in the infrastructure was added using the Portal. And you are going to need identical copies — for developer experimentations, for CI/CD, test team, performance testing, customer acceptance testing, production.

Another violation of this rule is when at the beginning of the project the infra developers have good intentions to use an IaC tool. But in a hurry every now and then they cut corners — let’s add this little detail using the Portal since I don’t have time now to figure out how to do it using my IaC tool. And then, later on, you forget those little things and another developer needs to create a copy of the infrastructure e.g. for performance testing — and the infrastructure doesn’t work. “But it works in my machine!” — sorry, you can’t use that phrase anymore. What you have now is one single working but brittle infrastructure environment which is not defined in the infrastructure code — and no way to reproduce it. So: you must not add to the infrastructure any resources bypassing your infrastructure code.

You should keep your infrastructure code in a version control system like Git, of course. And infrastructure code is code, and like with any code you don’t commit broken code into a Git repository. When you pull latest from a Git repository the first thing you should do without making any modifications is to run the apply command (“terraform apply”, “pulumi up”…) with the code. There should be no changes to the infrastructure at this point, of course. If the IaC tool says it needs to add, delete or modify some resources either someone did commit to a Git repository infra code without applying it to your common environment or your infrastructure code is broken. A professional programmer in any language won’t create new code if some tests are broken — first, you fix the tests and then you continue to add new code. The same way an infra programmer should stop adding new infra code if the infra deployment is broken — i.e. if you can’t run your infra deployment with one IaC command fully automatically without errors. Don’t continue adding tricks and hacks to the infra code if your infra code is broken — stop adding new features and fix the root cause first. If you let one hack inside you soon have twenty of them.

Golden Rule 2: The Infrastructure Solution Must Be Simple

The infrastructure solution must be so simple that any developer in the software project is able to do both applications and infrastructure.

The most successful software projects in which we built both applications and cloud infrastructure followed this rule by the book — every team member could work both with apps and infra.

How Well Does Your Infrastructure Score?

If I audit some cloud infrastructure I could be using e.g. these simple scores from zero to five.

2 points. You did use an IaC tool. But your solution violates both infrastructure code golden rules. You added little pieces here and there bypassing the IaC tool. Your infrastructure has documentation which says that in the first run you need to add flags A, B and C, and in the first run the IaC tool fails “but it’s ok”. Then turn on flag A and B, copy-paste the security group id that was created in the first run into file X and do the second run. Your project is divided between the application team and the infra team (the magicians who are the only persons who know how to maintain the fragile infrastructure). Shame on you, you could do better than that!

3 points. Your infrastructure is simple. There are no flags, hacks or tricks, manual steps or long documentation — the infra code is the documentation. You are able to create a new environment just by running the IaC tool (once and fully automatic without errors). Any developer can create a personal copy of the infrastructure for his or her purposes to experiment with some ideas. And once the developer is happy with the experiment he or she can destroy the environment with one IaC command (fully automatic and without errors, of course) — and all infra resources are gone, no orphans left behind silently to accumulate costs). Well done! But — you can do better.

4 points. All aspects of the 3 points category are implemented. The solution needs to be fully automatic but also elegant and maintainable — all cloud resources need to have a consistent name and tag scheme, cloud resources need to be defined in reusable modules etc. And additionally, your IaC also creates all monitoring, alarms, and dashboard fully automatically when you create a new cloud environment. Wow! You can simulate production in every aspect. Great! But there is one more step if you want to be perfect. 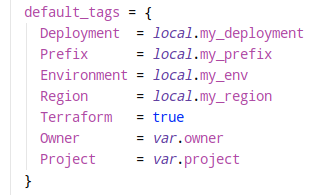 Default tags that make it easy to look for resources by tags in AWS.

You Are Allowed To Use the Portal, But…

If you have a difficult problem you just can’t figure out how to do using infrastructure code, first create the solution using the portal and/or cli tool. In some cases, the portal and cli tool create all kinds of magic behind the curtains that is hard to find out just by reading the documentation (e.g. roles and rights, annotations in resources, etc.). Then experiment with the solution you created with portal or cli tool: check that it works, and then carefully examine all resources that got created. Then re-implement the same resources using infrastructure code. If your infrastructure code solution doesn’t work the same way you have a working reference solution (the one you created using the Portal) and examine carefully all resources side by side. Finally, you figure out how to do it using infrastructure code only. Migrate this infra code solution as part of your IaC solution and verify that nothing broke by creating the whole infra from scratch, at least every now and then.

Cloud infrastructure programming is hard. But it is not rocket science. I have found out that the hardest part is not the technology itself but how to be stringent with some basic rules — no infrastructure creation bypassing the IaC tool and infrastructure solution must be simple. If you follow those two rules you already are on a good path in your software project.

The writer is working at Metosin using Clojure in building applications and using e.g. Terraform and Pulumi in building cloud infrastructures. If you are interested to start a cloud project in Finland you can contact me by sending an email to my Metosin email address or contact me via LinkedIn.