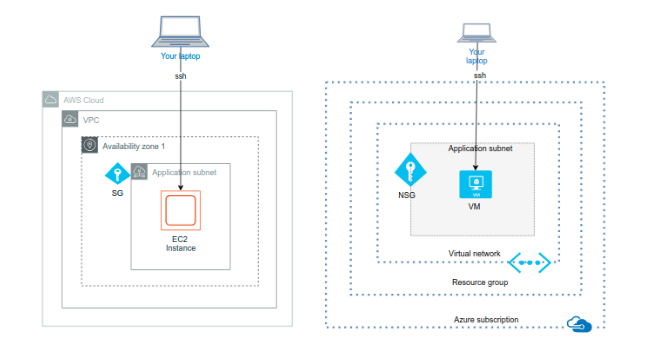 AWS and Azure Intro Demos in a Family Portrait.

In my new unit I was asked to create some training material how to do infrastructure coding for both AWS and Azure. I considered a while what kind of infrastructure to use as an example and finally I decided that the infrastructure should be as simple as possible (not to intimidate new cloud learners) but comprising some basic elements that you can find in every infrastructure: a virtual network, a subnet, a firewall and some computing resource. So, I created two intro demonstrations, one for both AWS and Azure sides using this specification. The demonstrations can be found in Tieto / Public Cloud team’s Github account:

In this blog post I comment how incredibly similar the demonstrations are even though they are deployed into two different public clouds.

Environment parameters. In the envs folders we host the various environments. In this demonstration we have only the dev environment, but this folder could have similar environment parameterizations for qa, perf, prod environments etc. If you look at both solutions you find that the dev.tf files in both sides are pretty similar: first there is the Terraform backend definition, then locals definitions and finally we call the env-def module injecting the parameter values of this environment.

Modules. In the modules folder we have the terraform modules that are used by the environment definition (env-def, also a terraform module itself). Both sides host the (conceptually) same three modules:

The virtual networks in both sides are pretty similar. First in both AWS and Azure sides the modules define the virtual networks themselves (vpc and vnet). Then the modules define a subnet and a security group for the subnet. Defining these entities using Terraform is incredibly similar in both AWS and Azure sides. Since we are defining a public subnet the AWS side requires some additional infrastructure boilerplate: an internet gateway and a route table.

Therefore in the Azure side we define just one main resource group into which we create all cloud resources of the demonstration. In the AWS side we create 5 distinct resource groups for listing resources based on their most important tag metadata.

The modules start with ssh key definitions — to make things easier for new cloud learners I have automated the creation of ssh key pairs in both demonstrations. There are separate Terraform functions for storing the private key part whether you are using Windows or *nix as your development machine (once again to make things a bit easier for new cloud learners; BTW thanks for Sami Huhtiniemi who kindly provided the solution how to store the private key in Windows side calling Powershell as terraform local-executor).

Both modules define a public ip that will be assigned for the virtual machine (Azure solution has some extra infra boilerplate — requires a virtual network interface (nic)).

The actual virtual machine definitions are also pretty similar. In the AWS side you tell the subnet and security group of the vm when defining it, in the Azure side you define the vm and tell its nic, which has the association to a subnet — a bit differently done but conceptually the same.

The writer has two AWS certifications and one Azure certification and is working at Tieto Corporation in Application Services / Public Cloud team designing and implementing cloud native solutions. If you are interested to start a new cloud native project in Finland you can contact me by sending me email to my corporate email or contact me via LinkedIn.