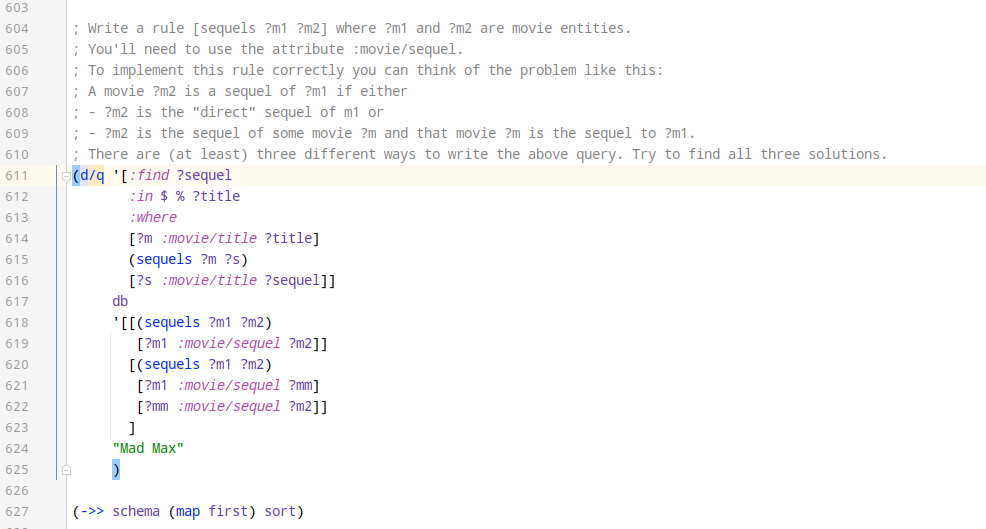 I started my software engineering studies in 1991 at the Helsinki University of Technology (nowadays Aalto University). I did my Master’s thesis at the Artificial Intelligence department, so I had a chance to do some Lisp and Prolog programming during my studies. When I graduated, my first job was a C programmer job. At that time, it was impossible to find a programmer job for Lisp or Prolog outside academia. I couldn’t have dreamed me programming Lisp and Prolog professionally one day.

About one year ago, I got interested in Datomic, a transactional database with a flexible data model that uses Datalog as a query language. I implemented my Simple Server exercise using Datomic as data storage; you can read more about that project in Clojure Datomic Exercise. Then one year passed, and I had forgotten Datomic. In December 2021, I started a new project where I implemented some queries against a Datomic database. I got excited regarding Datomic’s query model. Datalog is a subset of Prolog, i.e., you make the queries as logic programming against facts in a database.

Clojure and Datalog is Lisp and Prolog

Prolog is a logic programming language. In a Prolog program, there are certain facts and rules interpreting those facts. Prolog is well-suited for specific tasks that benefit from rule-based logical queries.

So, after some 30 years, I finally write Lisp and Prolog professionally. :-)

I wanted to learn Datalog more. I found an excellent website with good introductory exercises for learning Datalog: Learn Datalog Today. The website provides an HTML interface for writing answers to the exercises. Since using HTML as an editor is a bit clumsy, I downloaded the Movies database schema and facts from the project’s Github repository.

This way, I have a nice development bench for the exercises: I can write the datalog queries using my favorite Clojure IDE, Cursive on IntelliJ IDEA.

I saved the transacted database into db var. This way creating the answers to exercises was quite simple:

There are nine chapters (0-8) in the Learn Datalog Today website:

Suppose you are interested to learn Datalog and logic programming. In that case, I strongly recommend you install the Datomic local development database, clone the Learn Datalog Today Github repository, and set up an exercise development bench to create the answers for the exercises and experiment with Datalog. Read each chapter with thought, and then do all exercises at the end of the chapter using your development bench.