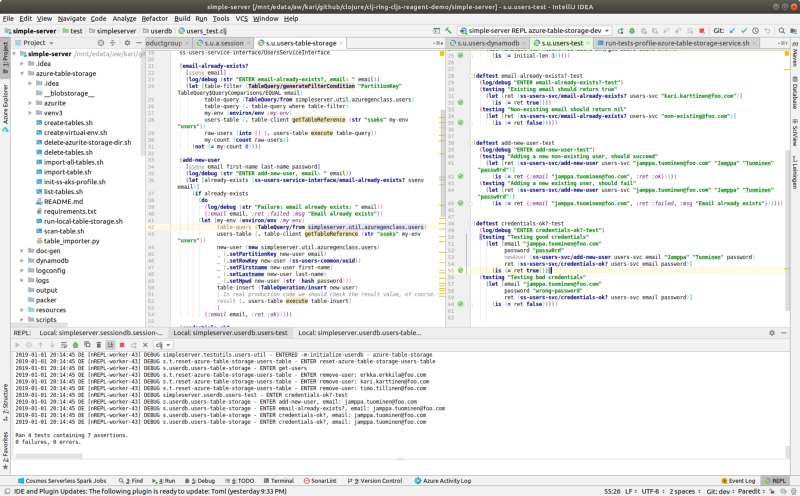 In my previous project AWS DynamoDB with Clojure I implemented all database handling using AWS DynamoDB for my Simple Server which I have used recently for my personal study projects. My original idea was to use this AWS Simple Server version to create AWS EKS and Fargate Kubernetes deployments for the Simple Server to refresh my AWS and Terraform skills. But then I decided to make some changes to my plans. I did my first Azure certification (Architecting Microsoft Azure Solutions) on December and heard from my boss that I’m going to be working in an Azure project in the beginning of year 2019. For this reason I thought that it might be a better idea to refresh my Azure skills instead and gather some experience how to create Azure infra using Terraform (I have used only ARM in the Azure side).

For making the development smooth I implemented some scripts to create the Azure Table Storage tables, import my test data to the tables, scan tables etc. You can browse these scripts in azure-table-storage directory.

I shamelessly re-used my old table-importer.py script from the AWS side and converted it to use Azure Table Storage Service: table-importer.py. The scripts are pretty much the same using just different libraries (boto3 for AWS and azure-cosmosdb-table for Azure). There is a README.md file in that directory which tells in more detail how to setup a development environment for creating the needed tables, how to import data etc.

So, after I had created the development bench (database) I could start the actual Clojure / Azure implementation.

Clojure implementation was once again really nice. Clojure and especially the Clojure REPL is the most productive software production environment I have ever used.

My first task at this point was to find an appropriate Azure Table Storage API. I googled for a while to find a native Clojure API but couldn’t find one. No problem! Since Clojure is a JVM hosted language and there is an excellent interoperability between Clojure and it’s host language Java you can use any Java API from Clojure. This project was a perfect chance to learn how to use Clojure/Java interoperability. I used azure-storage-java v. 8.0.0 as my API when manipulating Azure Table Storage. I couldn’t actually find the Table Storage part in the newest version 10 in that repo (there was an API for Blob Storage, though), but a short googling told me that there is an API for Table Storage in the previous 8.0.0 version. So I git cloned the repo, checked out the 8.0.0 version and read the samples how to use that version.

Clojure / Java interop was mostly very smooth. I basically just read in the Java API sample how the sample used the API and aped the usage in Clojure. Example. The API sample shows how to insert an entity to the Azure Table Storage:

If you can read Clojure you realize that the API calls are exactly the same.

The simpleserver.util.azuregenclass.users class is a so-called Clojure gen-class — a Java class defined in Clojure. You typically create these when you need to use some Java API from Clojure and the API needs some specific extended class (extended from some API base class) — the exact reason I needed to create the users gen-class:

There was only one issue with my Clojure/Java interop journey — refreshing Clojure REPL with gen-classes. Since gen-classes are Clojure code and you need to compile them to Java classes there was some hassle using them with REPL. If I make changes to many Clojure namespaces it is sometimes easier to refresh the REPL (to load all namespaces) instead of loading the changed namespaces manually one by one:

(do (require ‘[clojure.tools.namespace.repl :refer [refresh]]) (refresh))The problem was that the REPL complained that it cannot find the gen-class after loading it. I understood that there is some patch to fix this issue and I up-voted the Clojure JIRA ticket — hopefully this issue will be solved in the near future. (This was not a major hindrance to my development since usually you are working with 1–2 namespaces at a time and it’s not a big deal to load those namespaces manually to REPL — and even after refreshing you can just manually import the gen-classes.)

While working with the new Azure version I did some refactorings. I realized that there is some code which is pretty similar in all versions — singe-node, AWS and Azure versions, only some table manipulation parts differed. So, I created those small parts as independent functions in all three versions and then moved the main processing to a common function. The three versions call the common function and inject the table functions as parameters (functions are first-class citizens in Clojure). Examples:

… and then in both versions I can just delegate to the common validate-token function and inject the needed functions as parameters:

Using Clojure REPL to Experiment with a Java API

Clojure is a better Java than Java.

So, I have loaded the simpleserver.userdb.users-table-storage namespace in my Clojure REPL and switched my REPL to use that namespace (easier to call methods without namespace prefix…).

In the first “(into [] (let…” function call I experiment what happens when I ape the functionality I found in the Java API sample in Clojure => I get a list of users classes. Ok. In the next function call I ask the first of these items and then call the getPartitionKey Java method of that Java class => I get the email which was stored as PartitionKey in Azure Table Storage field. Pretty nice to be able to dynamically experiment with a library that was written in a static language.

Using Clojure/Java interop you can use any Java library if you can’t find a native Clojure library for your purposes. Using Clojure REPL it is actually even easier to experiment with a Java API that using Java itself.