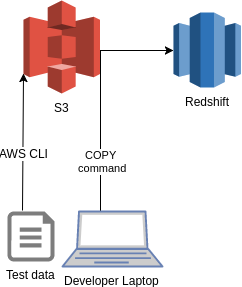 My project manager, distinguished business consultant Ville, told me a couple of days ago: “Kari, the customer wants us to create a component which fetches certain daily data out of customer’s Big data store, Redshift, and processes the daily data and creates an integration message regarding the results. I want you to start working on it.” Right. I was already waiting to start something new. :-)

Why Test Data and Test Infrastructure?

There can be several test data infrastructures:

AWS Redshift can be a bit tricky if you want to load a large amount of test data to it. Let’s share in this blog post some of my experiences during the past couple of days when I created my AWS Redshift test data infrastructure.

First I had to figure out which database to use. There is one Redshift cluster in each environment. I knew that other developers were using the same dev Redshift cluster for their development work. Basically there were three choices:

Redshift is based on PostgreSql and there is an excellent COPY command in Redshift and psql client, so using COPY command instead of SQL Insert statements was a natural choice with big data. The problem was that Redshift does not support local files when uploading data to Redshift, the files need to be e.g. in S3. So, I needed to do some AWS infra work — let’s use our favorite Infrastructure as Code tool Terraform!

Terraforming the needed AWS components was a rather simple task: I needed to setup an S3 bucket for the test data and create an IAM role for the COPY command and do some gluing between S3, IAM role and Redshift with AWS policies. It’s always a good best practice to do even small AWS configurations with Infrastructure as code tool since your code serves also as a good documentation e.g. if you want to consult some other developer later on how to do the same trick (instead of doing it in an ad hoc manner using AWS Console).

Truncating tables from old test data was trivial. I just needed two files: one bash file to start the trick and one sql file with actual truncate commands.

The COPY commands were rather simple to create after terraforming of the test data infrastructure:

… and of course some bashing with sed to create the actual sql file from that template and then feed it to psql.